This painting depicts the happenings in the Garden of Eden as described in Genesis 3.  Adam and Eve were perfect in every way, and lived and looked after, had dominion over the created order.  They had complete freedom, except for the one command that God had given to Adam, not to eat of the fruit of the tree of the knowledge of good and evil.  All was well, and both enjoyed fellowship with God.  But, Satan, the tempter came and deceived Eve into disobeying the one command, and causing Adam to do likewise.  Thus they fell into sin, for to disobey God’s Law is sin (1 John 3:4).  The painting shows Adam, who is transparent red, now in a subordinate position to Eve, who is transparent blue.  No such hierarchy existed before the Fall.  Satan is the black figure, and he has some appeal, the green and orange, but he has an area of sin, the solid blue.  And now both Adam and Eve also have the solid blue of sin, they are no longer completely transparent.  Eve has some ‘crows feet’ next to her eyes.  Crows feet are a sign of ageing, aging is mortality, just what God had warned would happen if His Law was broken, (Romans 6:23), and it was Eve who ‘saw’ that the forbidden fruit looked good, so the skin near her eyes show signs of death. 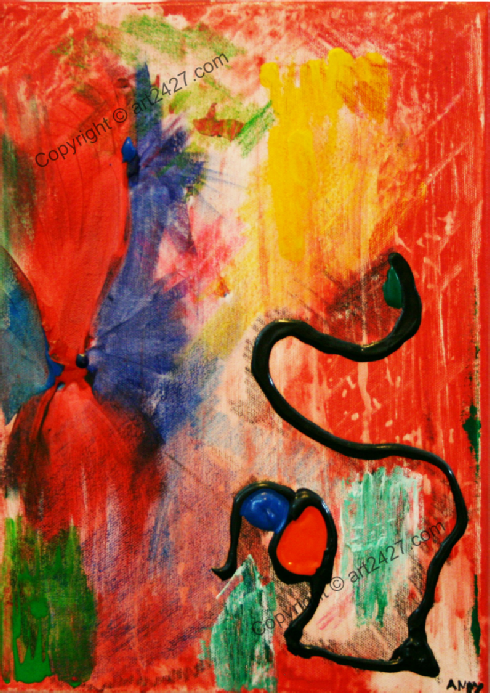